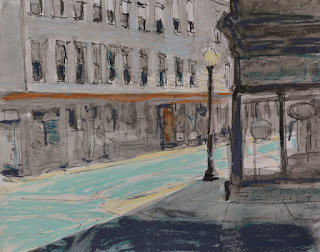 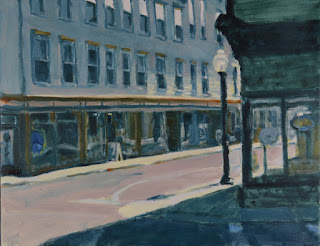 The 8x10 drawing and the 14x18 oil painting both represent the same location on Eagle Street in North Adams, MA.  I did the drawing first to find my way.  This section of Eagle Street is quite narrow and it bends a little bit creating a nice light tunnel in the afternoon.  It's a design I've used before: viewing the light from within a shadow.
Posted by Bob Lafond at 11:29 AM No comments: 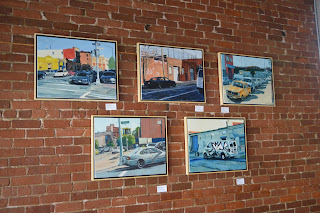 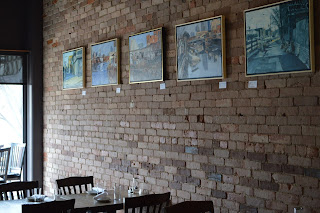 For those of you who do not follow me on Facebook, I have installed thirty Brooklyn paintings in the North Adams, MA restaurant PUBLIC, located near MOCA.  I hope that, if you are in the area, you may visit PUBLIC and see the paintings.  They will be up through July.
Posted by Bob Lafond at 11:21 AM No comments: 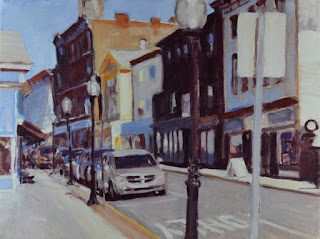 This is a view of the last stretch of Eagle Street in downtown North Adams.  The painting is 12x16, oil on canvas.  I like the scrunched up view of things, where shapes all jostle together, so one has to pause for a moment to make visual sense.
Posted by Bob Lafond at 10:54 AM No comments: 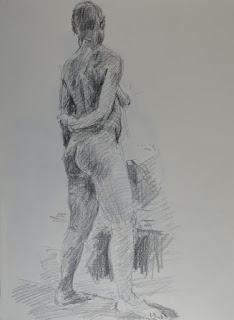 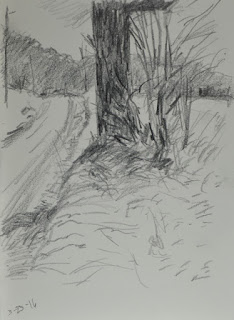 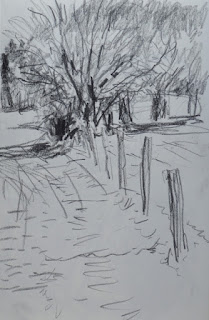 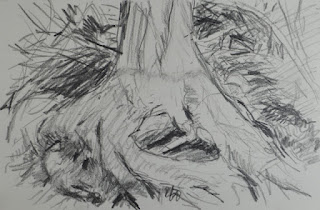 Earlier I wrote about "equivalents" within a painting, talking about forms, but not relating them to life outside the painting.  Lately, I've been reading Robert Hughes's book The Shock of the New.  He takes the concept of "equivalents" to its deeper level.

In the chapter "The Landscape of Pleasure," he writes, "Throughout this chapter I have tried to suggest that the chief tradition within which a modernist art of pleasurable sensation has been made - an art which is rigorous and intelligent, rather than the mere evocation of agreeable feelings -  is that of Symbolism: a tradition of equivalents, whereby the word (in poetry) or the colour patch and linear edge (in painting) achieve, without necessarily describing it, a harmony and exactness parallel to the satisfactions of the world.  Within the somewhat privileged space that Symbolism demands, infinite finesse is possible but conflict is not eliminated.  The artist is free to investigate the domain of feeling, not as an Expressionist splurge - the imperious I swamping everything it touches - but as a structure of exacting nuances and tonic doubts.  Such paintings cannot, by their nature, be 'movement' art.  In front of a Diebenkorn... one hears neither the chant of surging millions nor even the chorus of a 'movement,' but a measured voice, quietly and tersely explaining why this light, this colour, this intrusion of a 30-degree angle into a glazed and modulated field might be valuable in the life of the mind and of feeling."
Posted by Bob Lafond at 10:36 AM No comments:

This painting is a 12x24 oil on canvas, another from my series of North Adams, a view looking west on Route 2 at the Hoosic River bridge.  The metal structures that stand on both sides of the road contrast sharply with the surroundings.  I like the abstract quality of the bridge structures, shadows, and houses lining the road.  On a canvas, the shadow of a rail is equivalent to the line marking out a telephone pole.  The bridge structure seems to push up the mountain far in the background.
Posted by Bob Lafond at 12:19 PM No comments: 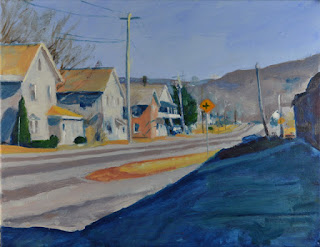 From the shadow of the Greylock Mill on Route 2, this 14x18 oil on canvas presents a view looking eastward.
Posted by Bob Lafond at 8:44 AM No comments: 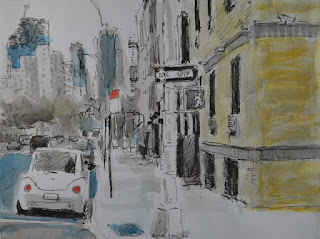 In this 9x12 drawing we are looking north on Third Avenue from the corner of President Street in Brooklyn.
Posted by Bob Lafond at 9:00 AM No comments: 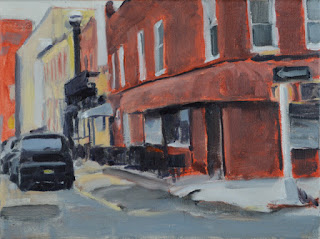 A 9x12 oil on canvas of a gray day at the corner of Carroll Street and Third Avenue in Brooklyn.  The sidewalk has been torn up and hastily replaced with road tar.
Posted by Bob Lafond at 11:01 AM No comments: 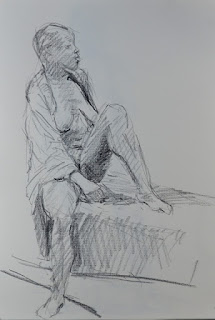 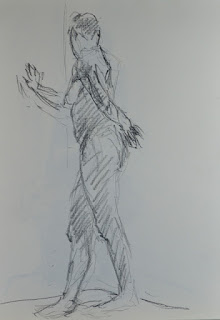 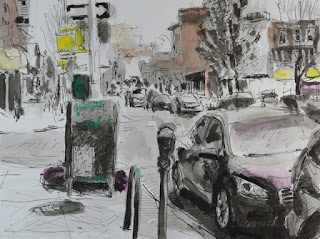 Washington Avenue near the corner of Park Place in Brooklyn: a 9x12 ink wash and pen drawing with touches of pastel and watercolor.  One of the things I learned from Ken Howard is to use a slightly diluted ink with the pen.  It has a nice effect.
Posted by Bob Lafond at 10:17 PM No comments: 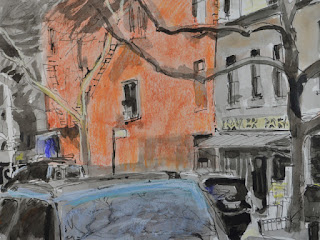 A 9x12 drawing of the corner of Sixth Avenue and Sterling Place in Brooklyn.  I saw the tree limbs reflected in the back window of the car, which made me stop and look.  The result is an array of ink and pastel marks and splotches across the paper, which reminds me of what I saw.
Posted by Bob Lafond at 8:28 PM No comments: 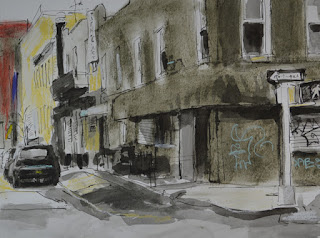 Another drawing of Brooklyn, a 9x12 pen and ink, with ink wash and pastel, of the corner of Carroll Street and Third Avenue.
Posted by Bob Lafond at 7:32 PM No comments: 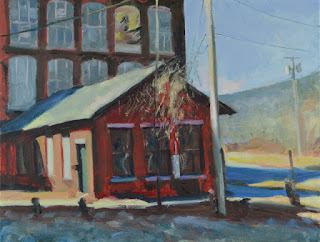 This is another of those paintings, a 12x16 oil on canvas of a brick building next to an old factory building on State Road in North Adams, about which you might ask, "Why did you paint that?"  I might answer, "It seemed like a good idea at the time," which wasn't that long ago.
Posted by Bob Lafond at 5:17 PM No comments: 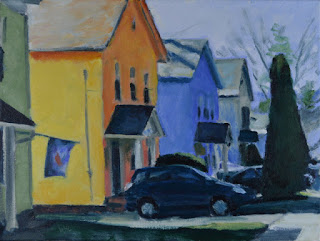 Houses in Blackinton, a 'suburb' of North Adams, MA, on a 12 x16 oil on canvas.  The backs of these houses face south so the afternoon sun lights the spaces in between them.  It doesn't hurt that they are brightly colored.
Posted by Bob Lafond at 8:08 AM No comments: 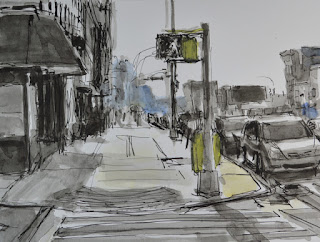 Last night I had the honor to assist a distinguished poet with a word.  Robert Hass was reading new poems at Williams College, including a great poem about an imaginary conversation with his old colleague and mentor Czeslow Milosz.  While reading a poem about the Japanese painter Ito Jakuchu, if I remember correctly, Hass hesitated, and asked suddenly, "Are there any painters here?"  I raised my hand.  He then asked, "How do you pronounce a-l-i-z-a-r-i-n?"  I loudly said "alizarin," as in "uh-liz-er-in" with the accent on liz.  He said "elizarin," and I said "alizarin."  He then said "alizarin" and finished the poem, which ended "...until you [something], don't talk to me about Cezanne."  When he publishes his next book, I will get it to read the poem.  Afterwards, I purchased one of his books, and he signed it "For Bob Lafond.  Thanks for the alizarin...Bob Hass."

The above is a 9x12 pen, brush, and ink drawing with touches of watercolor and pastel, of the corner of Fourth and Douglass in Brooklyn.
Posted by Bob Lafond at 9:23 AM No comments: 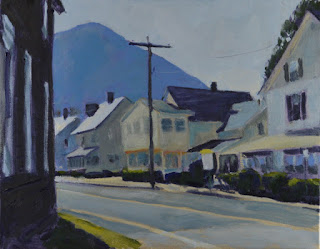 This is one of those paintings, where the execution may not match an ambitious composition.  I don't want to rework it right now, so will keep it aside so I can keep glancing at it from the corner of my eye. It's a view of Phelps Avenue at Route 2 in North Adams, which is actually the Appalachian Trail at this very spot.   Not too many trees here, though you can see Mount Prospect in the background from which the trail ascends and descends.
Posted by Bob Lafond at 10:06 AM No comments:

A Mountain in the Background 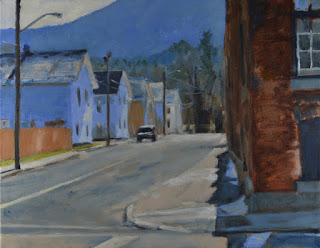 As a follow up to the "contre-jour" post, this 14x18 oil on canvas painting looks in the general direction of the sun, which is above the mountain in the background.  I used the old factory building on the right to block it out.  This is a view down Protection Avenue in North Adams, MA.  Though I didn't intentionally seek them, I love the repeated motifs of lines and forms, the jagged roof edges, the mountain and sidewalk curves, the light in the shadows, etc.  Just a simple view down a neighborhood street, except here there's always a mountain in the background.
Posted by Bob Lafond at 8:40 AM No comments: 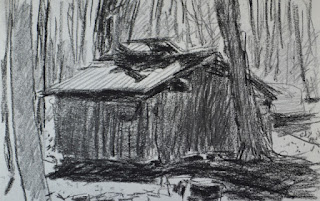 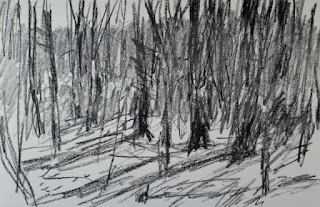 A couple of drawings from yesterday's sketchbook.  I went walking in the woods at Hopkins Forest.  One approach that I like is called "contre-jour," literally "against the day light."  I look in the direction of the sunlight, trying to block it with a tree trunk if possible, otherwise, one can't see anything from the glare, and proceed to draw.  Besides the glare making it difficult to see edges yesterday, it was quite cold, making my efforts shorter in duration.  But I think you get the idea.
Posted by Bob Lafond at 10:57 AM No comments: 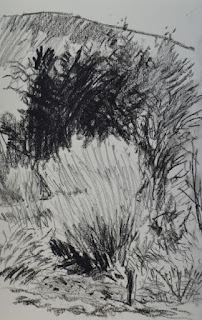 This small drawing, from my walking sketchbook,  shows the edge of the road at the bottom, a fence post, a gully, a sun-lit tree in front of a mass of shadowy pines on the way up visually to the mountain rim in front of the top edge of sky.  Overlaps and edges from bottom to top and back again.   Nathan Goldstein writes in his The Art of Responsive Drawing,  "The old adage, 'You are what you eat,' can be extended to the realm of art: You are what you draw.  Your drawings reflect what fascinates you as an artist and as an individual.  Responsive artists don't draw as they think they should, but as they feel they must.  They do not make drawings of their subjects, but about them."
Posted by Bob Lafond at 10:23 AM No comments: 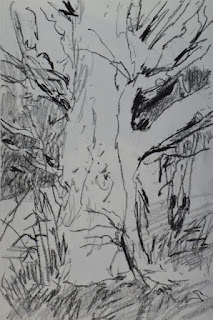 A simple drawing from a walk of a couple days ago.  One of the things you might notice if you walk among trees is that they tend to go up in the air, while drawings seem to work best when the elements in them are contained somehow on and within the paper.  In this drawing, I attempted to create a fan-like design with the lines of trunk and branches at the top to keep the eye within the frame.
Posted by Bob Lafond at 8:13 AM No comments: Recently I did a Yupo version of this view of the sinking boat in the Gowanus Canal as seen from the Carroll Street Bridge in Brooklyn on a dingy day.  This is an 18x24 oil on canvas version.  From a google search, I learned that there was a Gowanus art project of some sort a few years ago featuring an old boat, but this boat is not the one that appears in the photos.
Posted by Bob Lafond at 7:39 AM No comments: