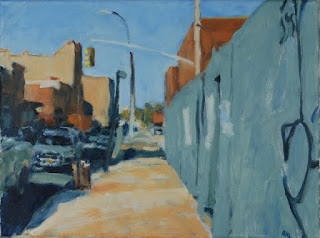 Plenty of time to finish paintings at the moment while waiting...This is a 9x12 oil of Dean at Classon in Brooklyn.  They keep re-doing the fence at the right.  Google maps shows at least two different earlier fences.  The new fence then received pictographical graffiti.
Posted by Bob Lafond at 1:06 PM No comments: 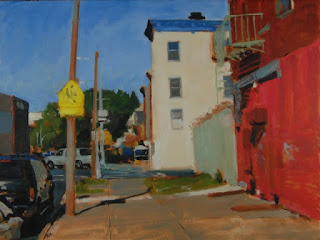 This is an 18x24 oil of a view on Classon looking towards Pacific in Brooklyn.  I wanted to post it before the storm arrives.  Where I live electricity may not be available tomorrow evening, and if it goes out it may be days before it comes back.
Posted by Bob Lafond at 9:40 PM 4 comments:

A Street in Naples 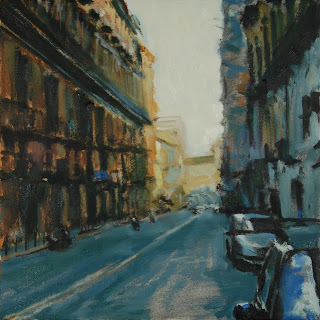 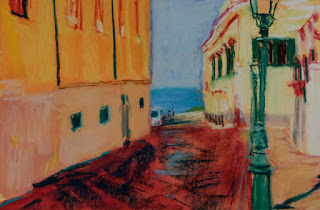 This past weekend I spent two days on a pastel that was overcooked, and is now gone.  This one is medium rare in comparison.  8x12.

There's another vision of beauty described on the first page of The Golden String,  the autobiography of Bede Griffiths:  "I remember now the feeling of awe which came over me.  I felt inclined to kneel on the ground, as though I had been standing in the presence of an angel;  and I hardly dared to look on the face of the sky, because it seemed as though it was but a veil before the face of God...It was as though I had begun to see and smell and hear for the first time...I experienced an overwhelming emotion in the presence of nature, especially at evening.  It began to wear a kind of sacramental character for me.  I approached it with a sense of almost religious awe, and in the hush which comes before sunset, I felt again the presence of an unfathomable mystery."
Posted by Bob Lafond at 10:21 PM No comments: 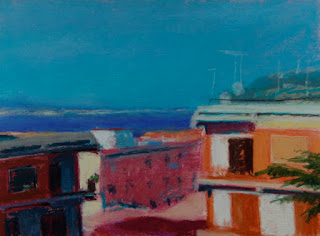 I found the following quote from Maupassant in a magazine article:  "From time to time I experience strange, intense, short-lived visions of beauty, an unfamiliar, elusive, barely perceptible beauty that surfaces in certain words or landscapes, certain colorations of the world, certain moments..."  It caught my interest because I experienced a vision of beauty walking along a roadway recently.  The late afternoon sunlight raking a bluish road surface next to the tan gravelly edge, with brilliant grass further in off the road.  Nothing else, but I just stood there transfixed by what I saw.
Posted by Bob Lafond at 9:47 PM No comments: 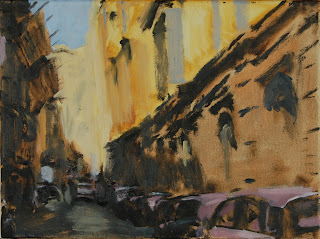 A 9x12 view of a Naples street, closer to what I am looking for.
Posted by Bob Lafond at 9:51 PM No comments: 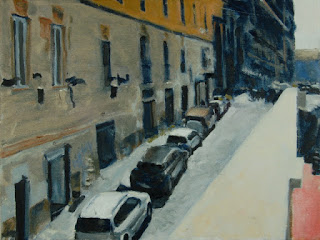 12x16 oil of Rua Catalana (the lower street) at Via Medina in Naples.   I am not sure that this picture is what I want yet...It may undergo revision.

Arnheim writes, "The Pointillists displayed the Newtonian revelation that neutral gray comes about as the union of various colors.  Although the effect of a straight gray does not vary all that much from the additive mixture of multicolored dots, it makes all the difference for the meaning of the pictorial statement that the drab tranquillity of standard existence is revealed as an accumulation of all the riches."
Posted by Bob Lafond at 8:37 PM No comments:

Ornate Column and Dumpster in Naples with a Definition of Painting 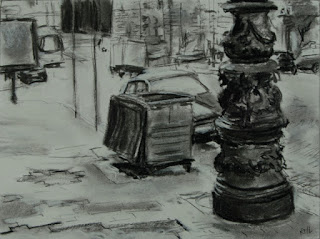 Another 9x12 drawing of a street scene in Naples.   I also made more progress on the painting I started yesterday.

"Painting is a sublime instrument of dissatisfaction, of dissent from any kind of visual orthodoxy and received idea, not excluding those of late modernist mannerism.  No work of art can ever be experienced at first hand by as many people as a network news broadcast or the commercials that grout it.  That does not matter. It never has.  What does count is the energy and persistence with which painting can embrace not 'empty value' but lived experience of the world; give that experience stable form, measure and structure; and so release it, transformed, into one mind at a time, viewer by viewer, so that it can work as (among other things) a critique of the more 'ideological' and generalized claims of mass media.  There is no great work of art, abstract or figurative (and especially none figurative) without an empirical core, a sense that the mind is working on raw material that exists in the world at large, in some degree beyond mere invention.  Painting is, one might say, exactly what mass visual media is not: a way of specific engagement, not of general seduction.  That is its continuing relevance to us.  Everywhere, and at all times, there is a world to be re-formed by the darting subtlety and persistent slowness of the painter's eye.  We are never loose from our bodies and the re-embodiment of our experience of that world -- its delivery from the merely conceptual, the unfelt, the second-hand or the rhetorically transcendent -- is what painting offers."
Posted by Bob Lafond at 10:04 PM No comments: 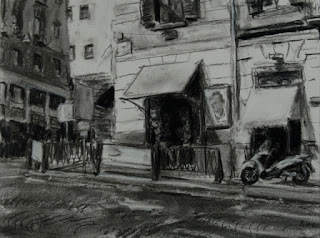 I did start a painting, but have another 9x12 drawing for now.  This location is the corner of Via Sanfelice and Via Medina.  I hope I am conveying the sense of non-stop activity that typifies Naples.
Posted by Bob Lafond at 10:11 PM No comments: 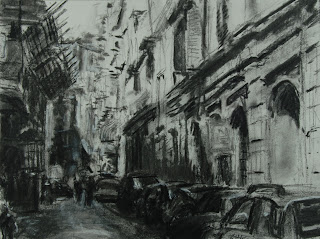 Another 9x12 charcoal drawing of a street scene in Naples.
Posted by Bob Lafond at 9:06 PM 2 comments: 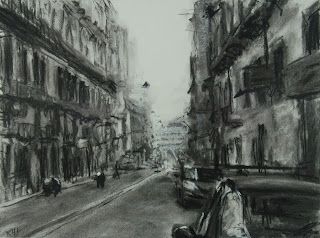 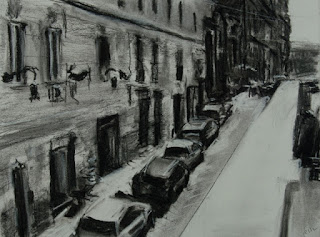 Exploring a new urban subject, the city of Naples, Italy, I am starting off with drawings.  There will be other non-urban images as well to come.   Oil and pastel paintings soon.  Both of these are 9x12.
Posted by Bob Lafond at 5:40 PM 2 comments: