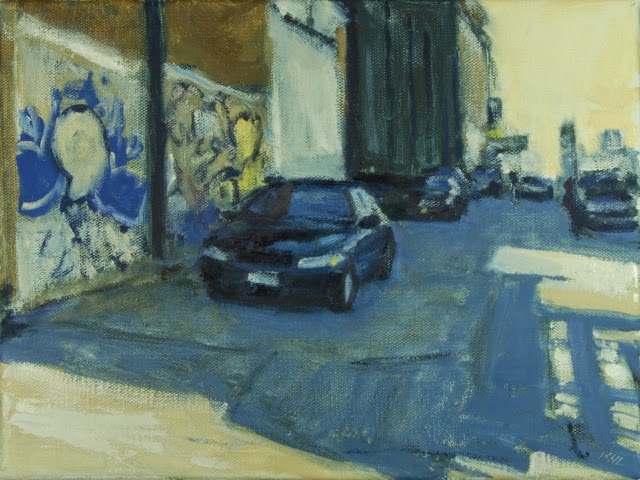 Another episode from my visit to Atlantic Avenue in Brooklyn:  9x12 oil on canvas.  When I saw this, I saw a relation between the shadow on the sidewalk and the graffiti on the wall.  The car just happened to be there, parked on the sidewalk, which is common in this part of Brooklyn, where there are a lot of car repair shops.  This is also an attempt to be simpler in handling and depiction despite the complexity of what's visible.
Posted by Bob Lafond at 7:54 PM No comments: 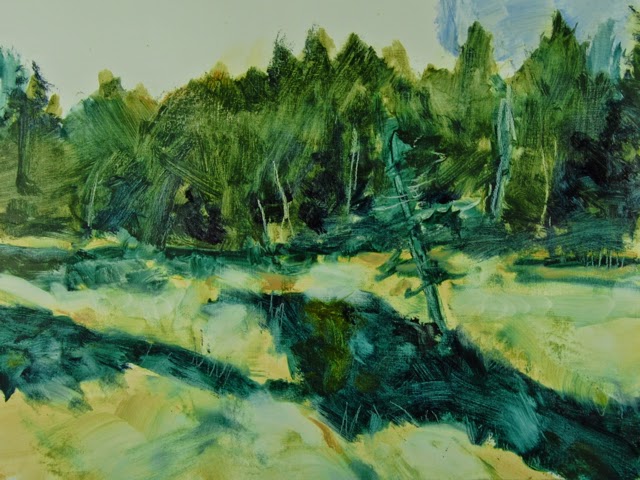 An attempt to simplify.  A 9x12 oil sketch on paper of the beaver dam location.
Posted by Bob Lafond at 8:28 PM No comments: 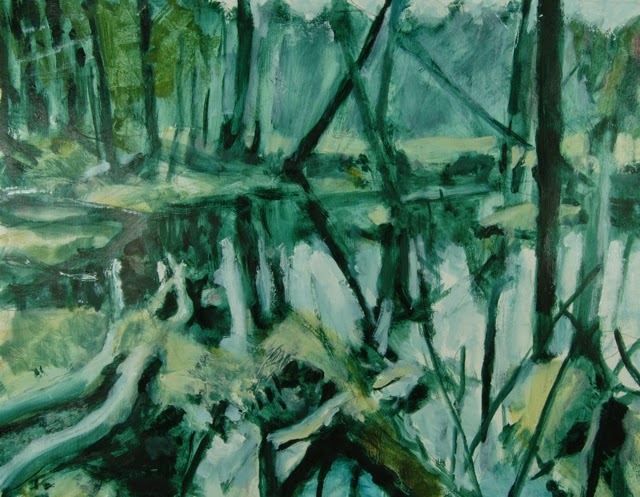 Last Saturday I visited a large beaver colony in the middle of a forest in Plainfield, MA.  The above is a 9x12 oil on paper view of a swamp created by the beavers.  It's an animal version of an urban area, with all the confusion and complexity one would expect.  I saw at least two beaver dams, several ponds, and some beaver houses, as well as some beavers, and multitudes of cut down trees.
Posted by Bob Lafond at 8:43 AM No comments: 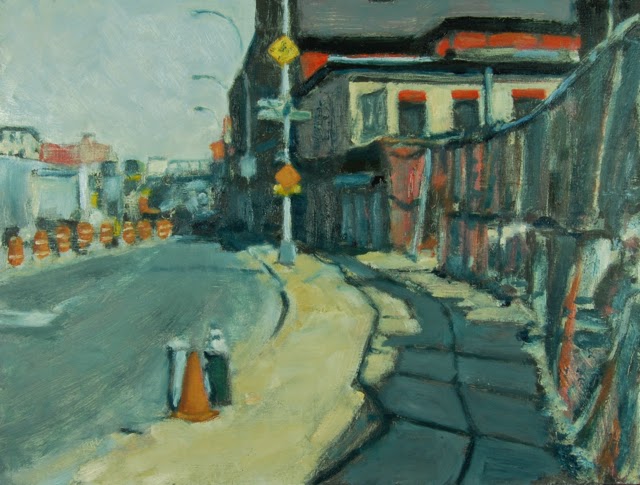 A 9x12 oil of an ultimate urban site, Atlantic Avenue in Brooklyn.  This particular location is at the intersection of Perry Place.
Posted by Bob Lafond at 8:18 PM No comments: 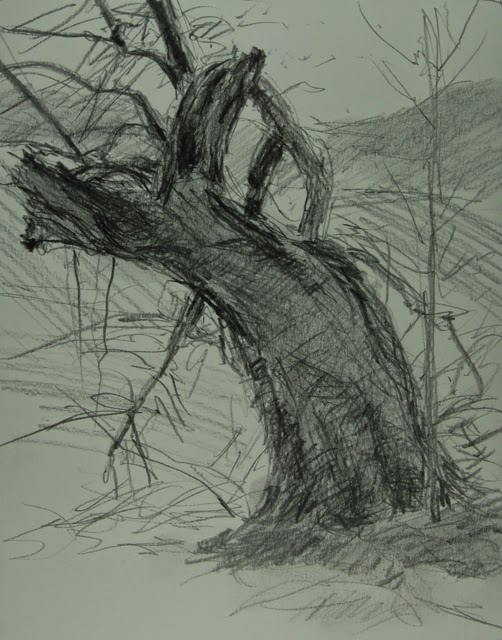 Yesterday,  I found myself in a place where I wished I had my sketchpad, which is why I should always carry it with me.  It's like being unable to speak.  The above 8x10 pencil drawing is from an earlier walk up Stratton Road.
Posted by Bob Lafond at 8:55 AM No comments: 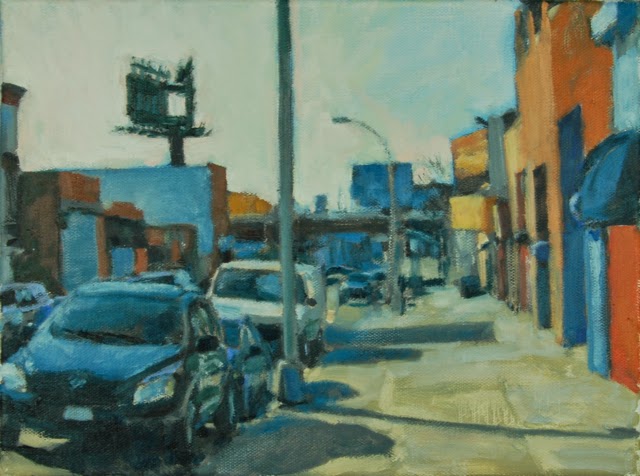 A reason that I love Brooklyn is that it offers the opportunity to paint pictures like these.  Nowhere else can one find the colors and geometry except in the city.
Posted by Bob Lafond at 7:09 AM No comments: 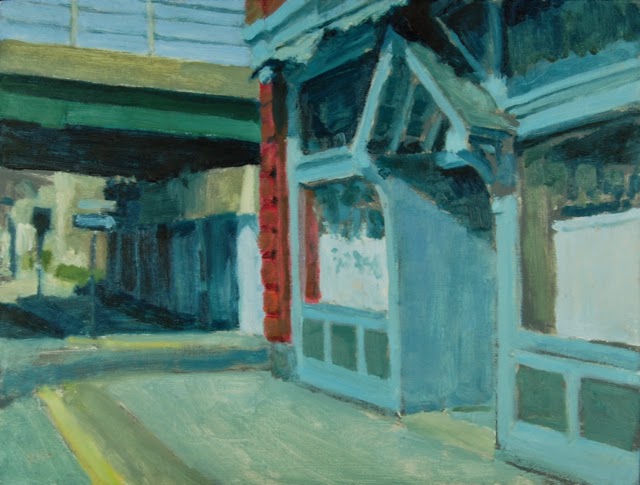 The Mohawk is a 9x12 oil on mdf panel,  in addition to other things.  It also appears to be a bar in North Adams, MA that is no longer open, but I like the way it looks, open or closed.  It's next to the location that I painted a few days ago, the underpass leading to MOCA.
Posted by Bob Lafond at 9:55 PM No comments: 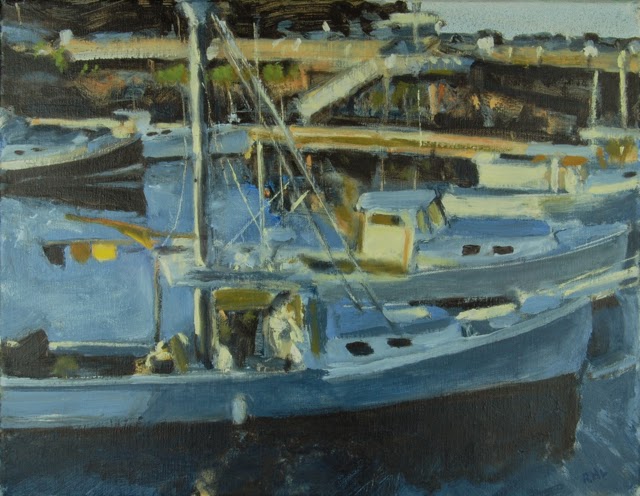 There's nothing new tonight.  The above is an 11x14 oil of boats at Ogunquit in Perkins Cove at dawn.  I completed it last year but did not photograph it until tonight.  For a while I thought I would re-work it, but I realized that would be starting all over again.  So it is what it is.  Just keep working and move on to the next painting.  It all makes sense it in the long run, so they say.
Posted by Bob Lafond at 8:23 PM No comments: 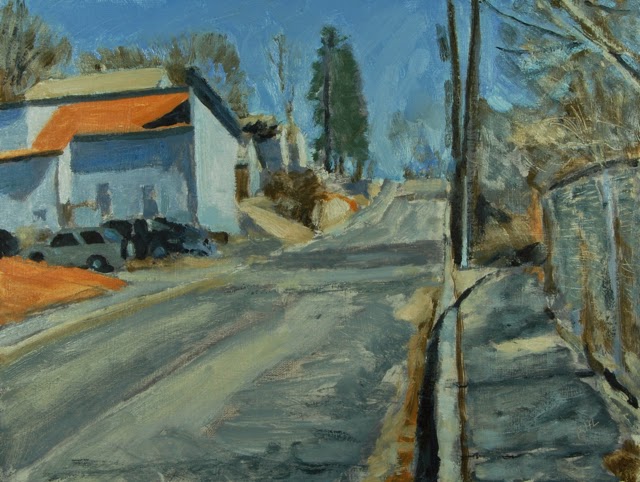 The North Adams, MA, city fathers and mothers aptly named this street, Prospect Street, because there's a prospect of the city viewable at the top.  I'm taking that on faith from a college student passing by who said the view is terrific from up there.  I have yet to climb the street.  North Adams has several very steep streets.  He told me there's one even steeper near the college, Mass College of Liberal Arts (MCLA).  More to explore.  I was taken by this view from the bottom because it reminded me of Cezanne. This is a 9x12 oil on mdf panel.
Posted by Bob Lafond at 8:09 PM No comments:

Still Life on a Studio Chair 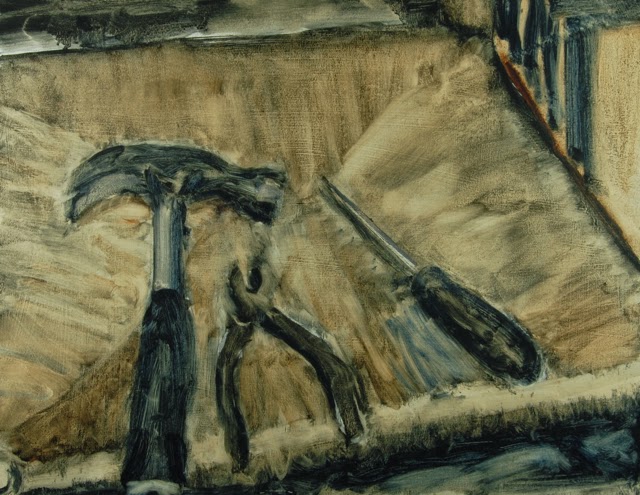 Instead of the studio table, this is a still life on a studio chair.  It's an 11x14 oil on gessoed paper.  I am in between paintings, and I used some left over paint to make this one as quickly as possible.   Painting on paper is fun: apply paint,  wipe with rag or finger,  apply paint and wipe again, etc.

I read somewhere that, when you are done, if you scrape all the paint on your palette into one pile, you might end up with an interesting gray.  I didn't use much of the ensuing gray in this oil sketch, but I discovered it's true (about the gray), and have been using the gray to start some paintings, and add a few touches in others.
Posted by Bob Lafond at 9:12 PM No comments: 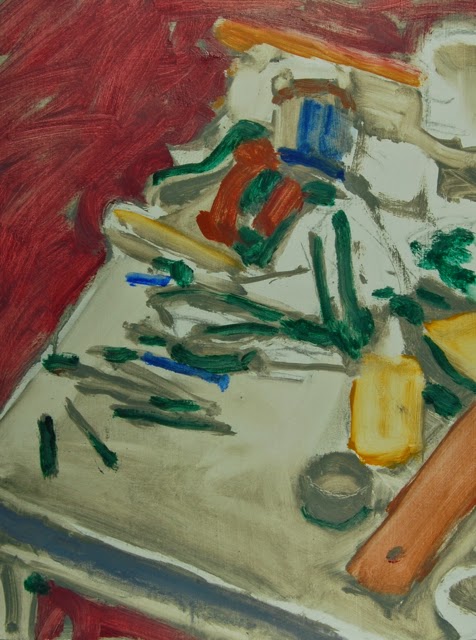 A 12x9 oil on gessoed paper of the studio table.  This one was done several days ago.  The table has changed again since Thor was in the studio today and did some work moving things around again.  It's okay.  I want to work with a table that changes naturally!

You may be wondering what these still lifes are about.  Well, I deliberately am trying to get the ambiguity you may sense.  Looks like... but not quite.... It's the way things appear... maybe.
Posted by Bob Lafond at 7:59 PM No comments: 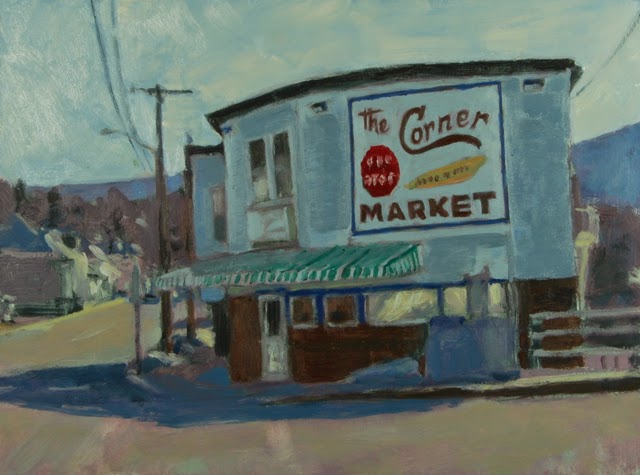 A 9x12 oil on mdf panel.  This market with the huge sign in North Adams has been painted many times and much better by Thor Wickstrom, a great painter who has done many North Adams and New England views.   But I thought I would try it because of the sign and the complexity of such a simple theme.
Posted by Bob Lafond at 9:03 PM No comments:

A 12x24 oil painting of the underpass leading to MOCA (Museum of Contemporary Art; see the "CA") in North Adams, MA.   The pass goes under Route 2 and the street is Marshall Street.  I don't know the characters painted on the concrete piers.  Maybe somebody does?  Presumably from some classic children's book.  I tried to keep it simple except for the area located between the shadows.  But even there I kept it sketchy.  There are a number of repeated motifs, which I like.
Posted by Bob Lafond at 8:30 PM No comments:

A Happening Still Life and Elstir 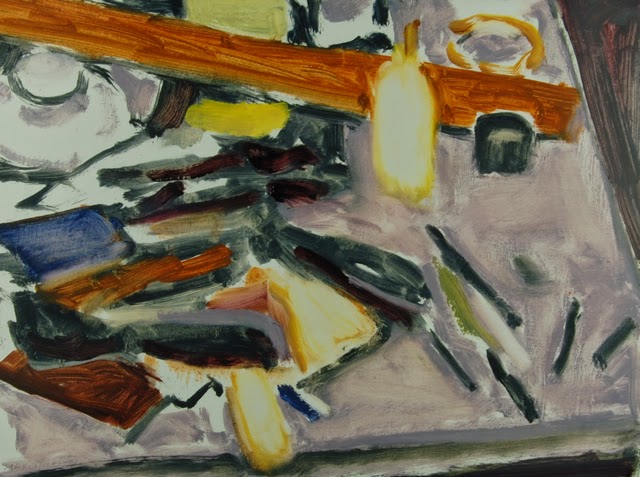 The above is a 9x12 oil on paper of the studio table, a view similar to the last pastel drawing.  I say 'similar' because when I start I work from one side and continue to the other side and let be what will be.  It's a happening.

I continue to progress to the end of Proust's The Guermantes Way, and encountered the famous passage, when our hero Marcel loses track of time in the Guermantes home while examining the Elstir paintings: "Among these pictures, some of those that seemed most absurd to people in fashionable society interested me more than the rest because they re-created those optical illusions which prove to us that we should never succeed in identifying objets if we did not bring some process of reasoning to bear on them.  How often, when driving, do we not come upon a bright street beginning a few feet away from us, when what we have actually before our eyes is merely a patch of wall glaringly lit which has given us the mirage of depth. This being the case, it is surely logical,  not from any artifice of symbolism but from a sincere desire to return to the very root of the impression, to represent that one thing by the other for which, in a flash of a first illusion, we mistook it.  Surfaces and volumes are in reality independent of the names of objects which our memory imposes on them after we have recognized them. Elstir sought to wrest from what he had just felt what he already knew; he had often been at pains to break up that medley of impressions which we call vision."  Looking at the world as patches of light and shade and color offers a different entryway to reality than seeing the world as a bunch of objects.

Posted by Bob Lafond at 8:30 PM No comments: 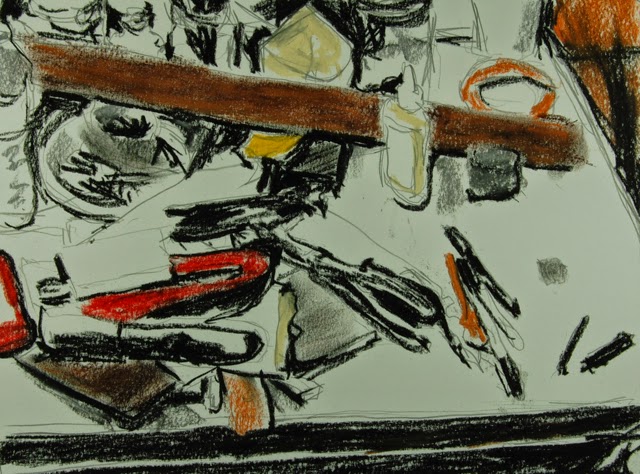 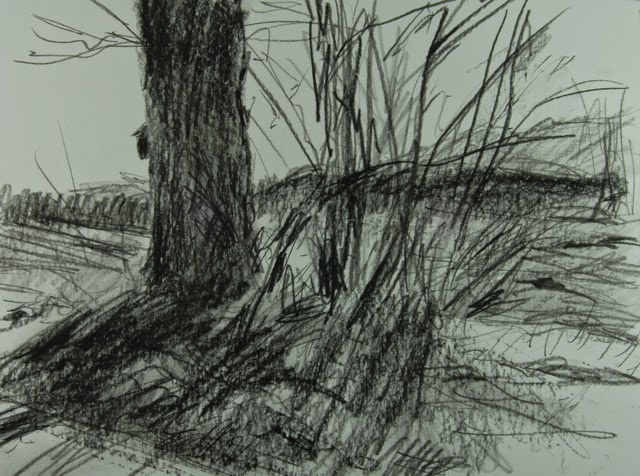 One can do almost anything with drawing, and the results can look quite different.  The top is a more abstract but a recognizable studio table still life.  I wanted to emphasize the scatteredness of the items.  I didn't change anything, but the things were changed nevertheless (by the other artist who actually uses the table).  Such is life, or such is still life.

The second drawing, also abstract but in a different mode, is this afternoon's walk-'n'-draw, the bird house tree on Stratton Road that I have done before.  Both are 9x12.  After quickly making this afternoon's drawing, I clamped the drawing pad to lessen smudging, and walked home with a very dirty set of fingers on my right hand trying to remember not to touch my face.
Posted by Bob Lafond at 7:54 PM No comments: 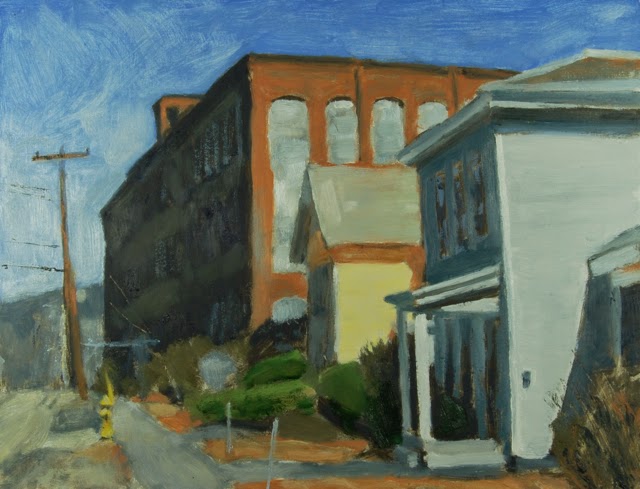 A 9x12 oil on panel of a view down Water Street facing north.
Posted by Bob Lafond at 8:31 PM No comments: 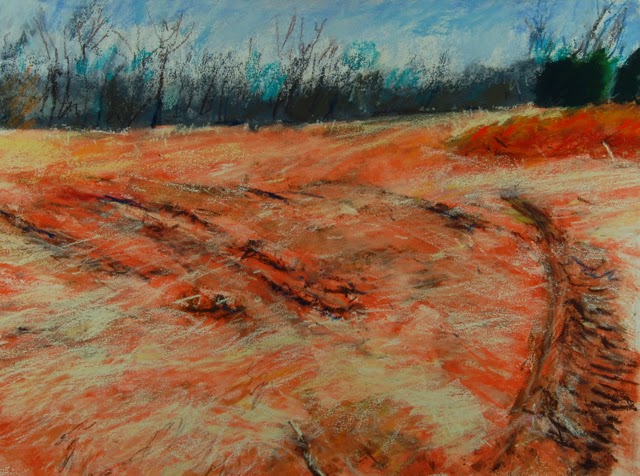 The only things you will find in a spring corn field are mud, manure, and dead stalks.  They are a common sight around here now.  You might see the above as a picture of nothing.  To me they are like old battlefields awaiting redemption and new life.  Apropos of nothing, here's a quote by Adam Kirsch from a poem by Philip Larkin, words that one wouldn't normally associate with Larkin:

In everyone there sleeps
A sense of life lived according to love.
To some it means the difference they could make
By loving others, but across most it sweeps
As all they might have done had they been loved.
That nothing cures.

The above is a 9x12 pastel.  The advantage of a pastel is that one doesn't have to wait for it to dry to take a photograph.
Posted by Bob Lafond at 8:26 PM No comments: 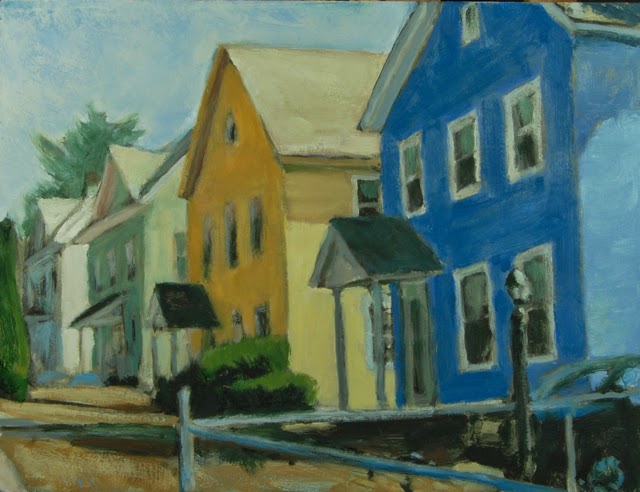 One can't help but notice these houses when driving through Blackinton, an historic part of North Adams, MA.  I think I will be tackling them again.  The above is a 9x12 oil on mdf panel.

Lately, I have been reading The Modern Element: Essays on Contemporary Poetry by Adam Kirsch.  In one essay, Kirsch describes "artistic talent" as "not a privilege but a responsibility".  I don't know why, but this hit me because I don't think artists often think of what they do as a responsibility.  As in don't waste our time, or make junk, or think about you are doing.  Only adds to the challenge.

I did update the previous post: a view of Spring Street, since I 'revised' the painting.
Posted by Bob Lafond at 7:31 PM No comments: 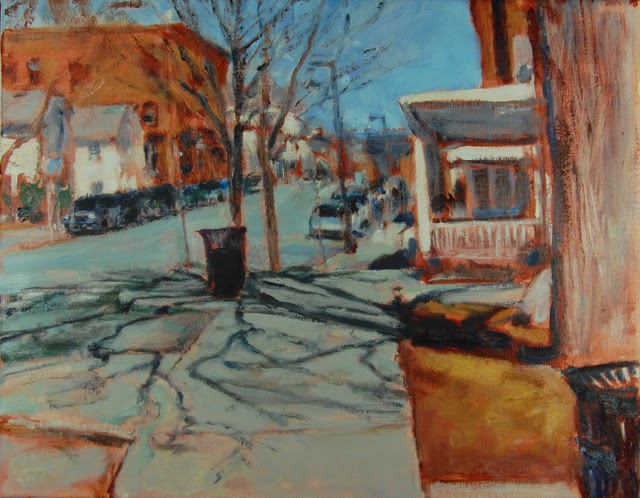 In the last few days Spring has finally arrived.  An 11x14 oil of Spring Street in Williamstown, MA.
Posted by Bob Lafond at 8:45 PM No comments: 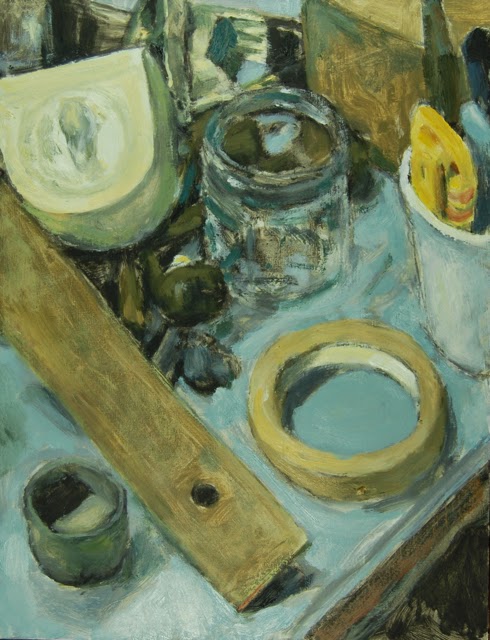 A 12x9 oil on mdf panel, which I hope you recognize from a drawing of a few days ago.  However, the drawing only revealed what was possible.  The paining was done en plein air d'atelier.  If you go to my facebook page,  you will see a photo of the actual still life and the painting.
Posted by Bob Lafond at 8:34 PM No comments: 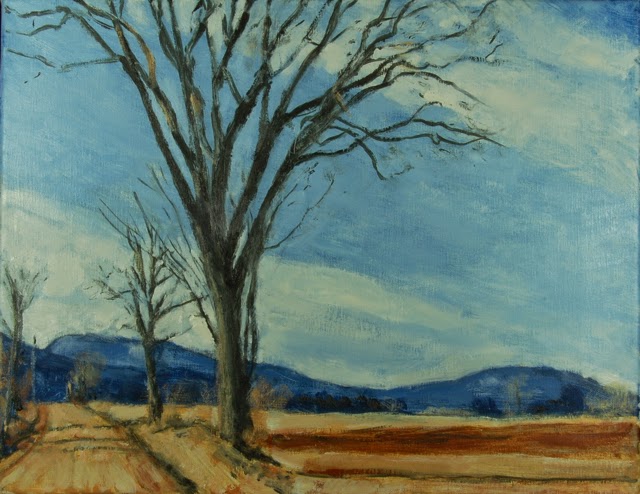 An 11x14 oil the view walking up Stratton Road in early spring.  Evidence that the mountains in the background have been scoured by the ancient glaciers is clearly visible in the soft contours.  Stratton Road on this stretch is a road on the brink of becoming a victim to 'mud season'.
Posted by Bob Lafond at 8:16 PM No comments: