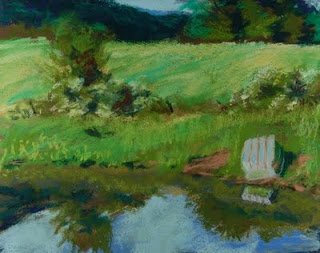 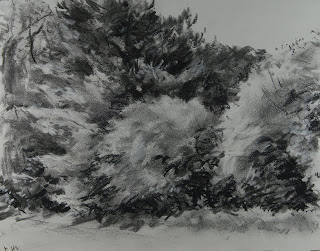 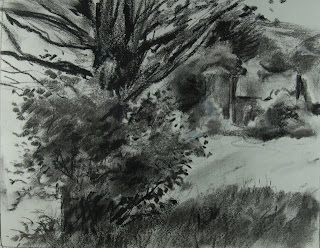 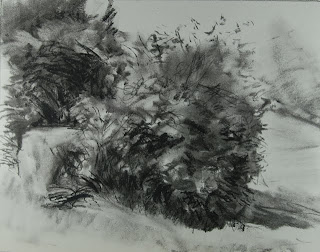 This weekend I spent hours drawing outside. Above are three samples of the results. I also visited Shangri-la again. There's a small pond there, and I plan on doing a series of paintings of the pond.
Posted by Bob Lafond at 9:59 PM 3 comments:

Other Side of the Canal 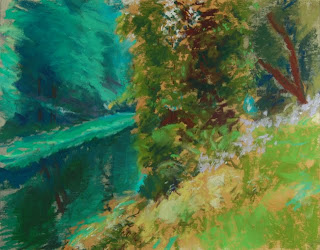 This is a view from the seldom used side of the canal. The sky was overcast making the greens more vibrant.
Posted by Bob Lafond at 9:41 PM 2 comments: 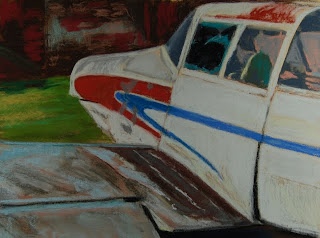 Another view of an abandoned plane. I have always been attracted to defunct technology, whether it's old falling down barns, or airplanes that will never go up again. Also the demands of working loosely within and around the hard forms of mechanical objects can improve my approach to landscape painting, which often allows too much freedom, or I should say, less discipline.
Posted by Bob Lafond at 10:18 PM No comments: 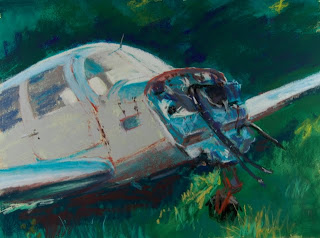 Just flights of fancy. This fanciful bird is 9x12 on pastelmat with pastel over acrylic washes.
A correction: last night's woodpecker was really a common merganser I was informed by a wise and perceptive neighbor, who saw the photo I took of the bird. It was a very uncommon bird for me, in an uncommon location, my backyard instead of the river. I think it recovered and flew away, a flight of desperation.
Posted by Bob Lafond at 10:09 PM No comments: 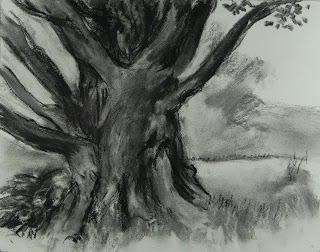 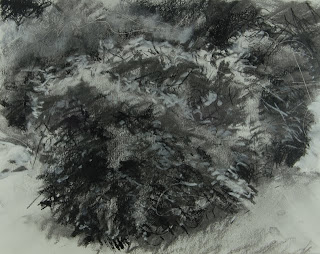 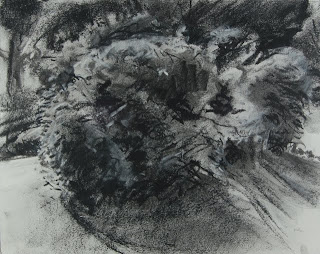 This weekend in between family events and rain, I spent several hours outside drawing. I think I was trying to make the impossible drawing, either of the bush or the tree. The possible drawing becomes the impossible drawing, when I don't know when to stop, and do another instead of plodding on. Buying time is a reference to not having time to paint this weekend. If I could buy time, I couldn't afford to buy much.
In the midst of writing this "remark" I heard some banging on the back glass door. I found a baby, a large baby pileated woodpecker in the back yard. I opened the fence door, so it could get out, since it doesn't appear to be able to fly. I don't know how it got here. I haven't noticed a large nest in the trees, though my google search seems to indicate that the nest is a hole in a tree. My cats are staring out the back door at it.
Posted by Bob Lafond at 7:46 PM No comments: 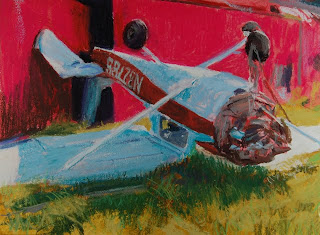 I have replaced my red barns with this red falling down hangar, and its abandoned airplanes. It's really just a rectangle with red and green, and an X in the middle. People ask me why the painting is upside down. I tell them it's the plane that upside down. There's actually a photograph of the plane somewhere on the Internet that shows the plane right side up, tied down, facing the hangar. A later storm blew it against the hangar.
Posted by Bob Lafond at 8:38 PM 1 comment:

Canal from Bridge Near Faherty's 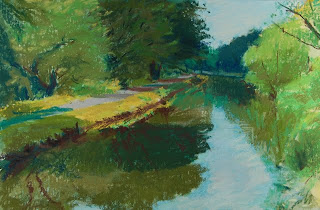 Lately there's been a wonderful aroma in the air around the trees and bushes in the park and along the canal, a smell of pine, honey suckle, with a pinch of burnt earth. Nature's kitchen at work. Possibly because the air is so moist, and the trees and bushes still flowering. Faherty's is a closed pub. Hard to imagine a pub near this view, but there's also a parking lot, and an old house, the remnant of a hotel that once stood at this location just to the left.
Posted by Bob Lafond at 10:33 PM 2 comments: 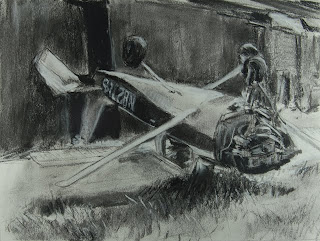 A while back, I did a few sheds because they say something about being human, and I think abandoned airplanes also comment on the human condition, or I should write that drawings of abandoned airplanes do that. Seriously. Anyway, they are fun to make. I will get back to the serious stuff tomorrow.
Posted by Bob Lafond at 10:14 PM No comments: 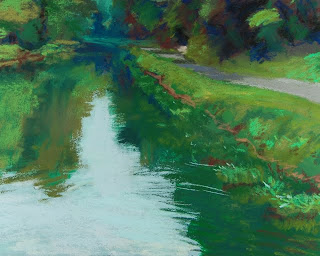 When the skies are gray, the green is vibrant and luscious.
Posted by Bob Lafond at 10:11 PM 5 comments: 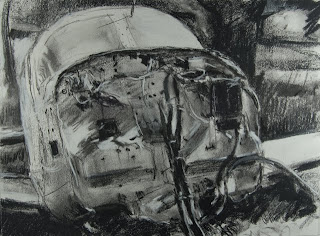 This is the Mooney front where the engine once attached, a face without a nose.
Posted by Bob Lafond at 10:08 PM No comments: 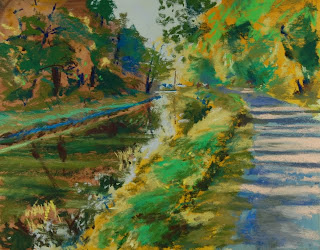 No dead airplanes tonight! This morning as I walked on the canal path, the aroma of French toast came across the road and canal from the nearby restaurant to accompany me for a short stretch right at this point of the canal path. The restaurant is called "It's Nutts".
Posted by Bob Lafond at 9:23 PM No comments: 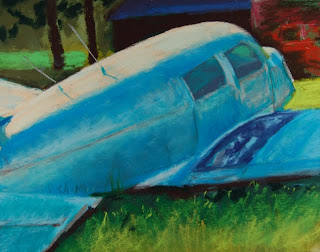 Somebody mowed the grass in front of the airplane, but not behind it. By late summer the grass will be above the wings. When I see this plane, I think it belongs to a big merry-go-round.
Posted by Bob Lafond at 9:33 PM No comments: 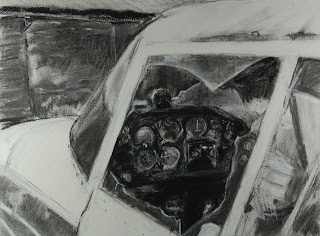 Next time I'll try to include more of the landscape around the plane, but this time it's the inscape in the plane that was appealing. This one is 9x12, charcoal and black pastel.
Posted by Bob Lafond at 9:31 PM No comments: 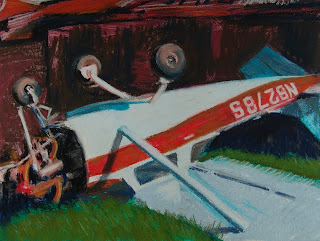 I had to try this one. I think I am learning how to paint. This is 9x12 on colourfix suede, pastel over acrylic wash.
Posted by Bob Lafond at 10:54 PM No comments:

Tree Hanging over the Canal 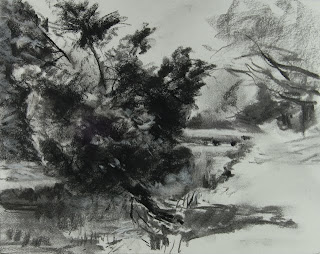 This afternoon I had some time to get outside, and did this drawing, after a warmup of a couple other drawings. I came across a large snapping turtle on the canal bank. He didn't look alive. His eyes were sunken in, and closed, and his shell was covered with dried mud. I poked the turtle gently with a stick. Of course, he was alive, and now a bit annoyed. He slowly slipped back into the water stirring up a cloud of mud from the bottom.
Posted by Bob Lafond at 9:08 PM No comments: 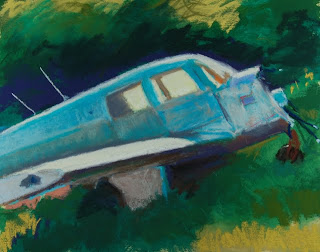 Once the engine has been removed the plane doesn't stay level with the ground, I have been told. Already the spring growth is overtaking the plane. It's called a Mooney and had a longer snout.
Posted by Bob Lafond at 10:07 PM 2 comments: 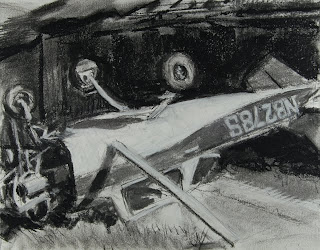 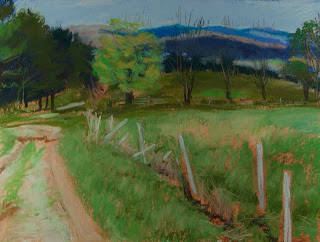 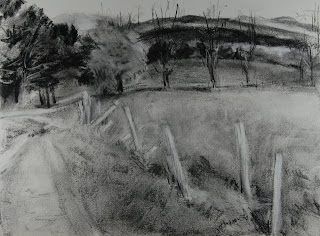 Steadily I have been reading The Life of Emily Dickinson by Richard Sewall. I find many affinities and parallels between her poetry, her need to write poetry, her religious outlook, her love of nature, and my own frequent drawing and painting. Below is a quote from a footnote, no less, from an article by Roland Hagenbuchle, quoted by Sewall. Painting nature with its changing light, the involvement in the present moment, the inability to capture this fleeting moment, the need to react expressively and creatively in a visual way to one's surroundings, painting quick, small, suggestive pictures, and the perilous contingency of this constant endeavor are some of the affinities and parallels that, to my mind, link her poetry to the painting I do. The quote:
The...concentration of the "critical" moment [the "Now"] is a crucial element in Emily Dickinson's poetry...It finds expression, first iconically, in the epigrammatic shortness of her poems, second thematically, in the numerous descriptions of unstable phenomena in nature such as the rising and setting of the sun or its precarious poise at the meridian hour of noon, the changing of the seasons at the solstices and certain fleeting effects of light in general. It can further be observed in the elliptical and often ambiguous syntax (including the hyphen), and finally in the use of polysemantic and often precariously unstable words and expressions. The world's drama is enacted before her eyes as a process or, to use her own words, as "God's Experiment"... The reversal from being into nothingness (and vice-versa) takes place anew at every moment, as "a gun...that touched 'goes off'". This eminently dialectic principle foredooms every attempt to pursue the romantic quest by means of analogy or metaphor. The poet experiences each instant of life and, even more so, that of death as a "critical" turning point or crisis:
Crisis is a Hair
Toward which forces creep
Past which forces retrograde
The nature of a turning point is such that it simply eludes all our attempts to grasp it...
If indeed existence proves to be a continuous crisis, we begin to understand why the poet preferably portrays moments of precarious poise between "advance" and "retrograde."
Posted by Bob Lafond at 9:47 PM 2 comments: 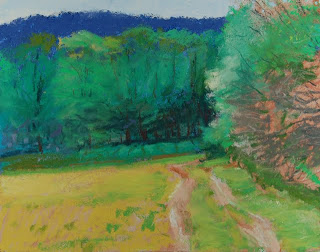 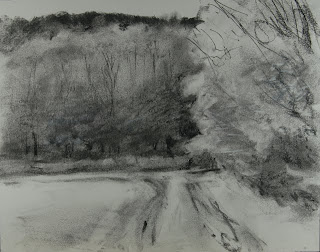 This weekend I found Shangri-La. This is a view of a dirt road coming to a "T" in an upper mountain field. I stopped there and walked back down. More to explore on another day. But I did much exploring. I hope to show more of what Shangri-La looks like.
Posted by Bob Lafond at 7:27 PM 4 comments: