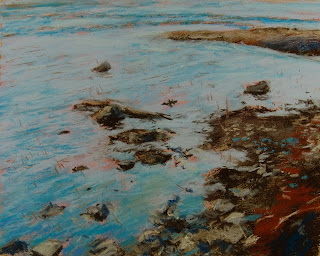 I am still at the river's edge. The water moves quickly. You can hear it. Whooossshh.
In the book, When the Trees Say Nothing: Writings on Nature, a selection from the writings of the monk Thomas Merton, he says: "Man can know all about God's creation by examining its phenomena, by dissecting and experimenting and this is all good. But it is misleading, because with this kind of knowledge you do not really know the beings you know. You only know about them. That is to say you create for yourself a knowledge based on your observations. What you observe is really as much the product of your knowledge as its cause. You take the thing not as it is, but as you want to investigate it. Your investigation is valid, but artificial...There is something you cannot know about a wren by cutting it up in a laboratory and which you can only know if it remains fully and completely a wren...I want not only to observe but to know living things, and this implies a dimension of primordial familiarity which is simple and primitive and religious and poor."
Merton was maybe thinking of scientists. I think of artists. How difficult to know anything, and even suggest what you might think you know or think you see. Merton was the son of two landscape artists, Owen Merton, a New Zealander, and Ruth Jenkins, an American.
Posted by Bob Lafond at 9:44 PM

I never knew that about Merton. Information vs. true knowing -- what we record and interpret is merely another translation, is it not? Thoughtful piece -- thank you!

Kelly, Thanks. I haven't found any images by Merton's mother, but his father's work can be seen http://www.thomasmertonsociety.org/omwcs.htm.