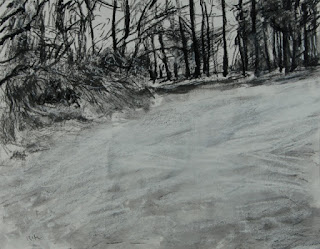 An 11x14 drawing of the same field corner from a few days ago, but later in the day.

I picked up the Arnheim book, Parables of Sun Light, again.  Two excerpts:

An early attack on the doctrine that art duplicates nature comes in Diderot's dialogue on the actor, in which he forcefully argues that a performance engendered by genuine passion would look ridiculous on the stage and that what looks natural on the stage must be an image calculated by the actor.  Diderot speaks of a "paradox"--which it is, as long as the difference between art and nature is ignored.

My grandson and I were drawing pictures of our beach cottage on its hill surrounded by trees.  Since we were sitting three hundred feet away and the day was dark, he had trouble discerning all details.  I said to him, "What you don't see, you don't have to draw!" but realized soon how difficult it would be for him to follow my advice.  It has taken Western painters many centuries to acquire the liberty of leaving out something they know is there.  It is a brazenness not easily adopted by anybody entering the practice of art afresh.
Posted by Bob Lafond at 10:10 PM No comments: 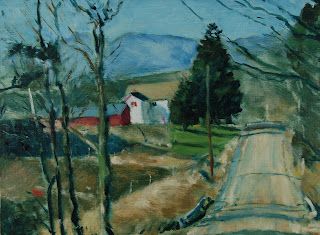 This is the road at the end of my street.  Only one side has houses.  The other side has a river.  It doesn't  flood because the road is high, and Pennsylvania on the other side is low.  The painting is a 12x24 oil. 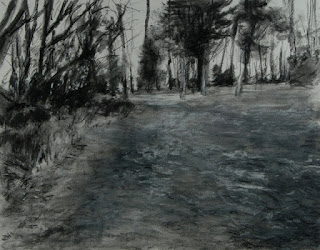 An 11x14 drawing that I did last week.  I am working on a non-field painting (with color!), but it's taking its sweet time, though I think it will be worth the wait.   The sun is not yet risen beyond the field in the above drawing.   I will post a drawing in the future done from the same spot during the day.

Lately I have been reading slowly a biography of Degas by Denys Sutton.  The author writes about the artifice of Degas' equestrian works, "As the artist was fond of saying, 'one gives the idea of truth with the false'."  There isn't anything true about what an artist does on the surface, but a deeper truth is the goal.  Otherwise it wouldn't be worth doing.

Posted by Bob Lafond at 7:56 PM No comments: 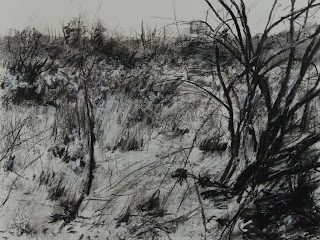 This is a similar location as the drawing posted yesterday.  Both are the same size, 9x12.  I particularly wanted to capture the light in the grasses.  I am drawn to fields, pun intended. They have sameness and enormous variety, light and darkness, a sense of freedom but also claustraphobia, life and death.  Walking across one field yesterday, I found the backbone and ribs of a deer.  Maybe I am getting to solemn and ponderous about fields.   They also are a bunch of marks across a piece of paper.

One of the methods I picked up from Degas (maybe he didn't use it quite the same way) is to draw quickly, then fix the drawing, draw again, then fix again, etc.  Previously I tried to get it perfect first, but the drawing turns out more interesting when parts are stabilized before moving further into it.  I have started to do pastels the same way.
Posted by Bob Lafond at 9:52 PM No comments: 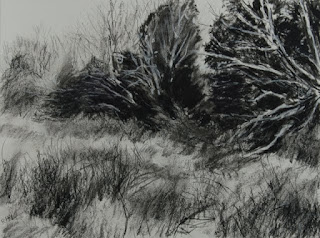 Beautiful day this morning, so I was out in the back fields looking in.  My goal is do something with what is usually not looked at.  We usually go by fields, not stand at the edge and look in.  I am trying just by accumulation of marks that emulate the direction of grass and tree limbs and light within shadow to make something of nothing.  I just finished a book that studied the question of why there is something instead of nothing.  The answer is called 'creation'.
Posted by Bob Lafond at 1:13 PM 4 comments:

Dusk at Fourth and 2nd 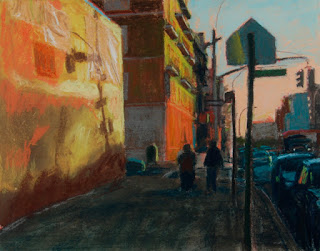 I went out
and this thought rose
before me like a great cathedral
and it said:
Transcendence.  Transcendence.
Or at least
try a bit harder.
Posted by Bob Lafond at 8:30 PM 2 comments: 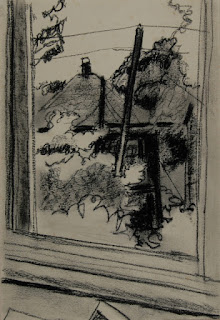 This charcoal drawing I did close to 30 years ago.  The glass broke and I am finally getting around to replacing it, so I photographed the drawing first before putting it back in the frame.
Posted by Bob Lafond at 7:50 PM No comments: 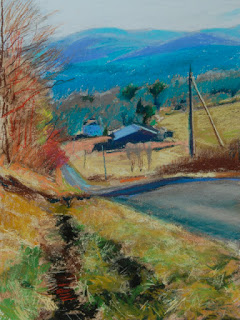 A 12x9 pastel of the Hopper from the gully on Sloan Road.  I started this pastel with an alcohol wash.  I have noticed that sometimes Degas would leave whole portions of a washed area untouched with hand applied pastel in a pastel.  But I did not do that in this case.  Next time.  I thought this view interesting from the standpoint of being in the gully hole.

It's another break from looking into fields.  I have more fields coming, alas.
Posted by Bob Lafond at 7:31 PM No comments: 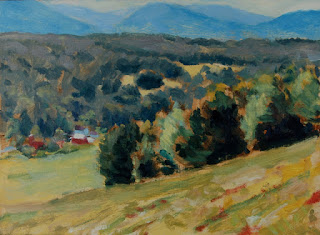 A 9x12 oil on mdf panel.    I resolved a while back to do out of season paintings if necessary.
Posted by Bob Lafond at 8:07 PM No comments: 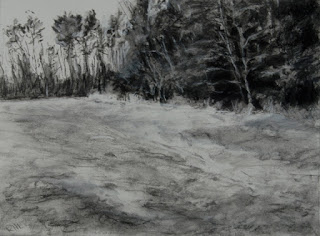 The ground is still dark on the field, even though the morning sun is rising to the left.   This is one of those fields that slopes at the corners so that when you stand in the middle it's as if you are standing on a hill, but it's not a hill.  The group of pines in the background was absolutely creamed by hurricane Sandy.  20% of the trees are broken off about 6 to 8 feet from the ground.

In the spirit of Degas,  I experimented with rubbing alcohol and brush to move around some of the charcoal dust.   The theory is that it would dry fast, and not wrinkle the paper.  I just need to do it once or twice.  Repeated washes do wrinkle the paper.  9x12.
Posted by Bob Lafond at 8:15 PM 2 comments: 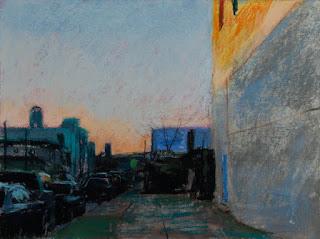 Another break from bleak fields.  9x12 pastel.  Evening coming down quickly in Brooklyn.
Posted by Bob Lafond at 8:39 PM 2 comments: I was listening to a Bartok piece on the radio a moment ago.  The announcer said that "you may notice a bit of darkness lurking in the corner" concerning the music.  She wasn't talking about the above drawing, but it fits.
Posted by Bob Lafond at 8:37 PM No comments: 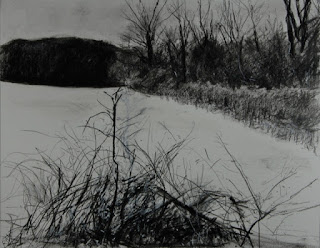 An 11x14 drawing of a field off Stratton Road, a corn field except in winter.  I often pass by this field and admire the upper corner in front of the dark trees.
Posted by Bob Lafond at 8:46 PM No comments: 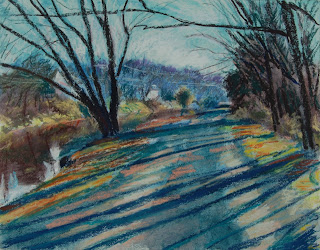 This is an 11x14 pastel view of the canal path at the end of my street from two weeks ago.
Posted by Bob Lafond at 8:05 PM No comments: 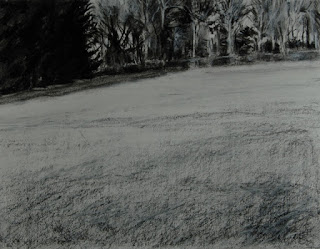 An 11x14 drawing of a nearby field.  It may look forbidding, but it's a familiar field.
Posted by Bob Lafond at 7:56 PM No comments: 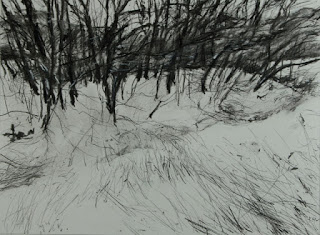 This past week I started, or better, returned to, a series of drawings made from looking into fields from the roadway.  They are better suited to black and white, at least for now.  The above is 9x12.
Posted by Bob Lafond at 9:33 PM 2 comments: 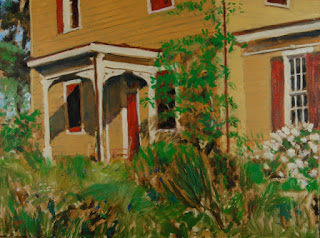 This 18x24 painting I completed shortly after Christmas.  I am now happily at liberty to post it.
Posted by Bob Lafond at 3:51 PM No comments: 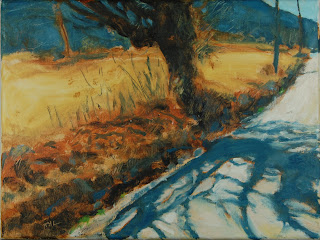 9x12 oil of my favorite tree, though it's only half a tree.  Half has been sliced away to accommodate the power lines.  Right now it's buried in snow.
Posted by Bob Lafond at 9:07 PM No comments: 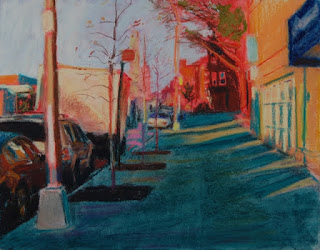 An 11x14 pastel.  I recently borrowed from the library a book called Degas: in Search of His Technique by Denis Rouart.   I'm still searching.
Posted by Bob Lafond at 8:20 PM No comments: 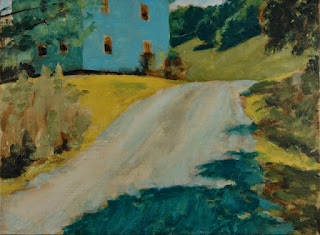 A 9x12 oil on mdf panel.  It was snowing when I did this painting last week, which is why I made it.

And "What matters is Van Gogh's almost raging insistence that the placing of the pigment, of 'the yellow that is somehow inside the shadow of the blue', is, in the severest observance of the term, a metaphysical act, an encounter with the opaque and precedent authority of essence."
Posted by Bob Lafond at 9:35 PM No comments: