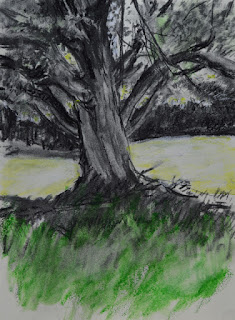 On Tuesday, I went for a long walk behind the Clark, going the length of the Stone Bench path.  It wasn't as exciting as I thought it might be.  Too many "Do Not Trespass" signs on either side of the path.  I returned to the hill behind the Clark and spent enough time at this tree for this drawing to appear in my sketchpad. It's approximately 12x9, charcoal, with touches of watercolor and pastel.
Posted by Bob Lafond at 9:14 PM No comments: 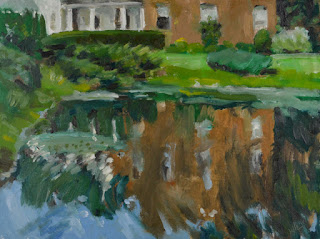 On Monday, I visited a delightful pond in Hoosick, New York.  This 9x12 oil on panel is the first of what I hope are more plein air paintings at this site.  There was no breeze, just some ducks that disturbed the water to keep it interesting.
Posted by Bob Lafond at 8:27 AM No comments:

Looking Across to Eastport 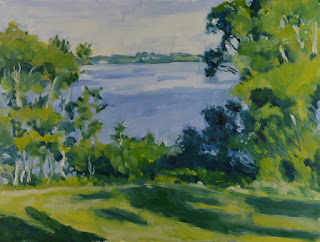 Thursday morning at Campobello Island I walked down the front lawn at the Hubbard Cottage where I set up and made this 12x16 oil on panel.  It's a view across Friars Bay towards Eastport, Maine, the first place the sun shines each day in the United States.
Posted by Bob Lafond at 1:18 PM 2 comments: 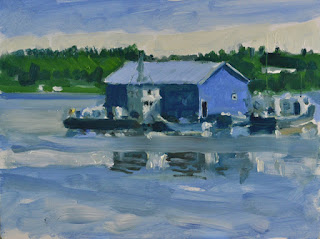 This 9x12 oil on panel is the third painting I did last Wednesday, this time at Welshpool, on Campobello Island.  It represents a floating dock/warehouse, which appears to be connected to the salmon farm out in the bay.  Located in the bay were several large, flat, round cages, which we were told were for raising salmon.  This painting was done late in the afternoon at high tide.  My wife and I were on Campobello Island attending a Road Scholar program on Eleanor and Franklin Roosevelt, wonderfully presented by Linda and Robert Godfrey.
Posted by Bob Lafond at 10:24 AM No comments: 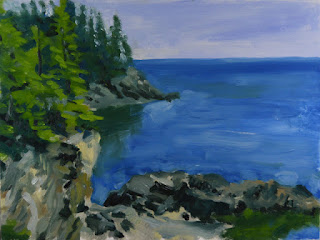 A 12x16 oil on panel view from the high point at Herring Cove on Campobello Island.  I learned later that I was standing near the spot where Eleanor Roosevelt sat against a tree in 1962 for the last photo taken of her before she died.  She loved this location, and I can understand why.
Posted by Bob Lafond at 9:08 AM No comments: 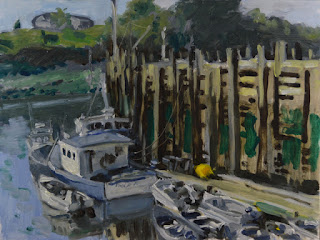 Wednesday this week there were no clouds or rain in the weather forecast at Campobello Island, but the day still started with heavy fog.  I drove to Wilson's Beach, set up to paint and waited for the fog to dissipate.  As you can see, it was low tide.  The owner of the largest boat, called "The Godsend," came by to chat, as did several other people from the area.  This is a 12x16 oil on panel.
Posted by Bob Lafond at 8:19 PM No comments: 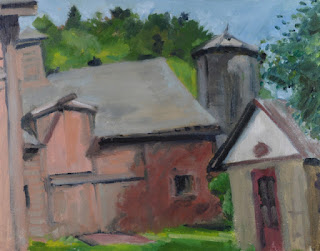 This morning I spent a couple hours painting at Sheep Hill with Valeri Larko and her students.  One person said that my painting's parts were moving.  Maybe because everything is topsy-turvy, which is not all my fault since the splendid barns are topsy-turvy.

One more Corot anecdote:  Corot spent six years, from the age of 19 until 25, working in different cloth merchant shops.  His father was trying to get him trained in the family business, but Corot was indifferent to the idea for a long time.  Awareness of cloth and textiles would later show up in the various costumes he acquired for his models to wear.  But, according to the story, he chanced to see a work by the English painter Richard Parkes Bonington in a Paris shop window, and, as a consequence, became determined to pursue a career as a painter.  The story is considered 'apocryphal' but something did happen to Corot at the age of 25.  When he went to Italy a couple years later to paint plein-air, he was older than most of his fellow artists, and his maturity helped him considerably to assume the role of a budding master.
Posted by Bob Lafond at 5:50 PM No comments: 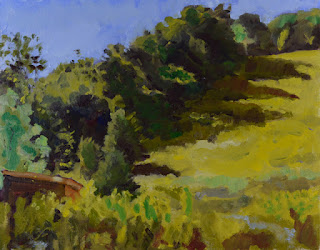 Here's an 11x14 oil on panel that I did this afternoon, while painting at Sheep Hill alongside Valeri Larko and her enthusiastic students.  Valeri Larko is a tremendous urban painter.  You can see her work at www.valerilarko.com.  But I discovered that she's also a great teacher and can paint anything like a master.
Posted by Bob Lafond at 7:39 PM No comments:

A Walk Down Fifth Avenue and the Death of Corot 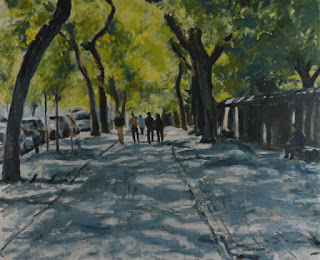 A large 26x32 oil on canvas of a view down Fifth Avenue near The Met and Central Park.

Believe it or not, I have another Corot anecdote, from the Michael Clarke book: "Viollet-le-Duc's account of the event [Corot's funeral service] in the Journal des Debats reveals that the service, at which the requiem was sung by the celebrated baritone and collector of Corot's work, Jean-Baptiste Faure, was somewhat spoiled by the excessive complaints of the officiating cleric that the press had not sufficiently reported that Corot, a devout man, had died a Christian.  These rantings were cut short by an unfortunate young madwoman who stood up amongst the packed congregation and let out a series of piercing cries."

Maybe she was his Muse. 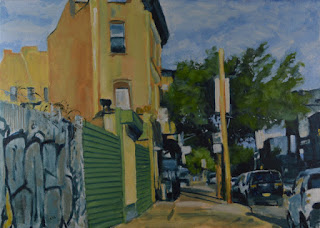 This painting, a 20x28 oil on canvas, represents the view down Bergen Street as one approaches Washington Avenue after having gone past Grand Avenue in Brooklyn.  One can't miss the triangular shaped building on the corner of Bergen and Washington.

From Corot and The Art of Landscape by Michael Clarke, the best short book on Corot that I've found, comes another Corot anecdote:  "...Corot suffered an official rebuff from the art establishment when in 1865 the final choice for the Grand Medal of Honour at the Salon rested between one of his landscapes and a portrait of Emperor Napoleon III by Alexandre Cabanal (1824-89), an artist whose sanitized nudes, such as the famous Birth of Venus (Musee d'Orsay, Paris) of 1863, represented the height of fashionable taste at the time.  The verdict eventually went in Cabanal's favour after the twenty-sixth walk-through by the jury!"

This past weekend I visited the Corot gallery at The Metropolitan Museum of Art.  The room contains twenty-two (22) Corot paintings from all periods of his life, and most are masterpieces.  In addition two nearby rooms contained dozens of late 18th and early 19th century plein-air paintings done in Italy by Corot's colleagues, including two more Corots.
Posted by Bob Lafond at 9:53 AM No comments:

The Perils of Painting 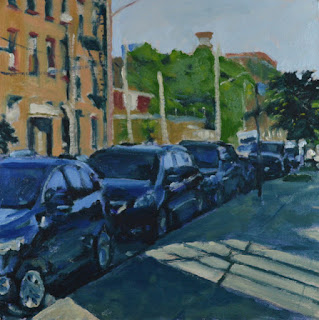 The corner of Nelson Street and Hamilton Avenue in the Red Hook section of Brooklyn: a 14x14 oil on panel painting.

Though I recently said I was offering a final Corot anecdote, here's another:  In 1833, Corot painted two views for the owner of a cloth factory in Soissons, one of the factory itself, a major painting now in the Philadelphia Museum of Art.  For both paintings, Corot received nothing.  One Corot scholar wrote, "Corot was considered an amateur; does one offer money to such people?"
Posted by Bob Lafond at 9:48 AM No comments: