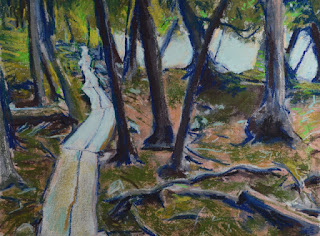 A 9x12 pastel sketch of another Jordan Pond plank walk to determine how to embark on a painting of it.  I like the serpentine walk way and the segmented view of the pond, which is only visible as light.
Posted by Bob Lafond at 5:34 PM No comments: 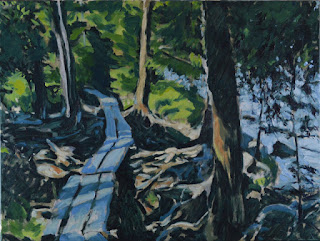 Jordan Pond is a state of mind, an interior space, where I wander down the wooden path around the pond.  This painting is an 18x24 oil on canvas.
Posted by Bob Lafond at 11:35 AM No comments: 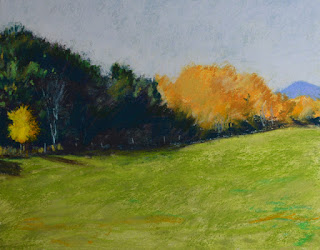 Just a simple pastel, an 8x10.  This was a view I saw early last week before all the wind, rain, and snow came.
Posted by Bob Lafond at 9:46 AM No comments: 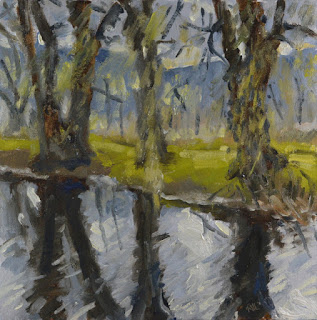 Though it wasn't a great day sunwise, I went to a pond in Hoosick, NY, to paint during the mid-afternoon yesterday.  This is a 10x10 oil on panel.
Posted by Bob Lafond at 7:55 AM No comments: 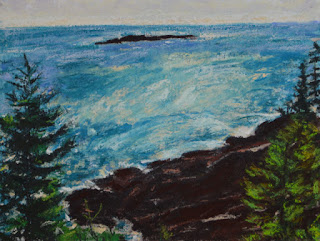 This little 6x8 pastel I'll call a 'study' to justify its existence.  It represents a view from the Ocean Path at Acadia National Park but could be anywhere north looking into the sea.
Posted by Bob Lafond at 10:24 AM No comments: 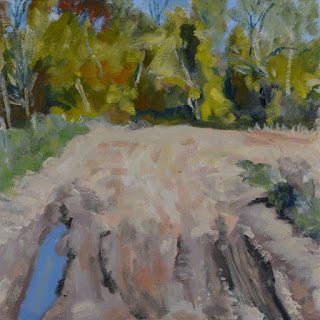 Right now this looks like a failed painting to me, but it seemed a good idea at the time.  I wanted to paint the tractor track puddle at the lower left, which is on an improvised, usually muddy, roadway edging a corn field.  The farmer came by on his ATV and told me I'd better hurry up before it dried up. I'm always tempted to paint pictures with stuff around the edges because you are not supposed to do that.  This one is 10x10 inches.
Posted by Bob Lafond at 10:40 AM No comments: 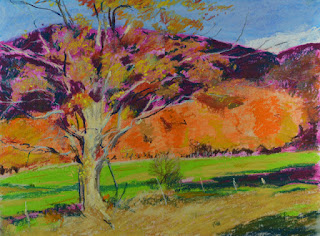 Late in the afternoon, earlier this week, if you had gone into the hayfield, and then gently moved under the barbed wire on its southern edge, while angling in the direction of the sun, and turned completely around facing the mountain, you would have seen something like this.  Since then, it has rained, the wind has blown, and the temperature has dropped.  So it doesn't exist anymore.  This is a 12x16 pastel.
Posted by Bob Lafond at 9:45 AM No comments: 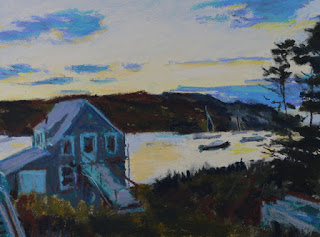 A 9x12 pastel view of an ancient evening on Monhegan Island.
Posted by Bob Lafond at 8:19 AM No comments: 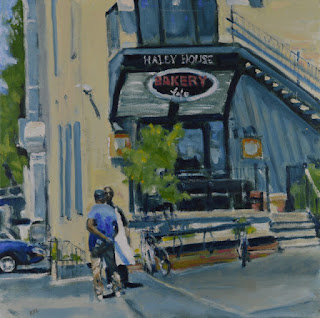 A view of the Haley House Bakery Cafe on Washington Street in Boston, MA.  It's a 16x16 oil on canvas.  It's the second of the two paintings I made for the silent auction, which will be part of the festivities honoring the Haley House Community's Fiftieth Anniversary on December 2-4.
Posted by Bob Lafond at 10:47 AM No comments: 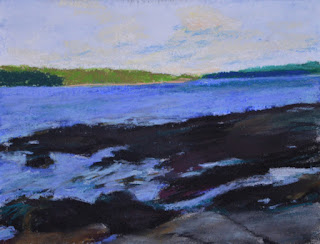 A small 6x8 pastel of a view from Schoodic Point in Acadia National Park.  The sun is going down but still hitting the trees across the water.  The water is rushing in.
Posted by Bob Lafond at 10:08 AM No comments:

Painting with One Hand 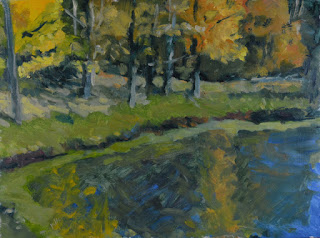 The legendary Aldro Hibbard said, "Paint with speed. Use up your nervous energy.  A morning's painting should wear you out." I painted yesterday afternoon on an embankment overlooking a favorite pond.  The temperature was in the 80's, but the wind was so fierce, I spent most of my time holding my easel in place with one hand, while painting with the other.  That was very tiring.
Posted by Bob Lafond at 9:55 AM No comments: 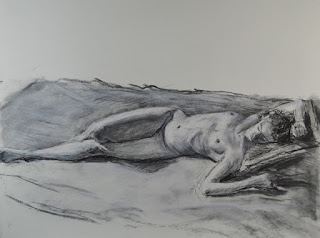 All I have this morning is a figure drawing from yesterday.
Posted by Bob Lafond at 8:50 AM No comments: 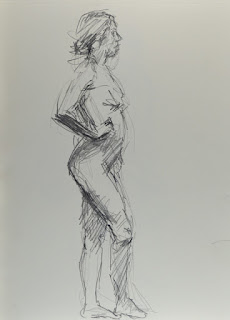 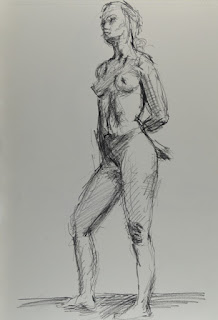 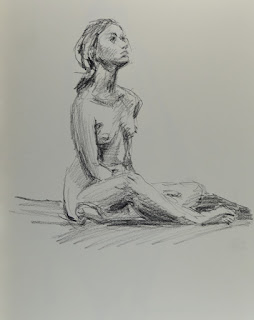 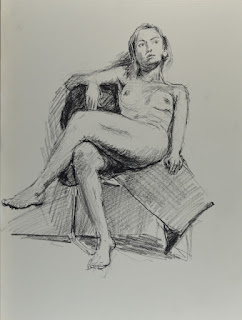 Last week I sat in the Wednesday evening session of Drawing New York, hosted by artist Simon Levenson.  Here are four drawings from that session, 9x12, charcoal or graphite pencil.
Posted by Bob Lafond at 5:24 PM No comments: 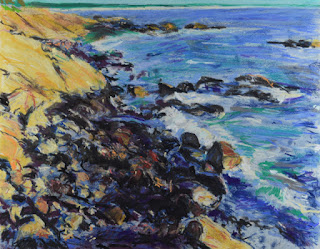 An 11x14 pastel of Ogunquit from the Marginal Way, a walkway along the water's edge.  I did this one on pastelbord, a nice hard surface.

Isaac Levitan belonged to a group of painters called the Itinerants, because they exhibited throughout Russia in the second half of the 19th century.  They were seen as opponents of the official academy, since they depicted Russian genre scenes, history, and people including peasants.  Levitan seldom painted people, but his landscapes were accepted as depictions of the motherland, a beautiful idealized place, that contrasted with the general misery of the people.  However, Levitan's landscapes offer much more than scenes of the motherland.  If we look at the landscapes of Levitan's contemporary, Ivan Shishkin, we see pictures of the idealized motherland with tall pines and great forests, in contrast to Levitan's emotional power.  Closer to home, for a similar contrast, compare the western paintings of Albert Bierstadt with Winslow Homer's late Maine seascapes.
Posted by Bob Lafond at 2:13 PM No comments: 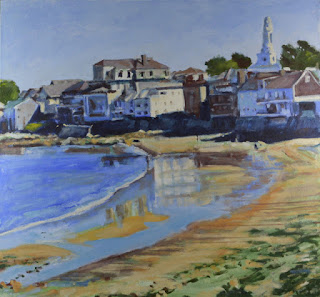 This painting, which I've been working on for the last several days, is a view of Rockport. It's a 30x32 oil on canvas.  I may continue working on it.

One noticeable aspect of Isaac Levitan's paintings is that he seldom adds or includes human figures.  Compare his paintings to those of the fine painter, David Curtis, for example, who feels compelled to include figures.    For Levitan, nature carries or reflects all the human interest for the viewer.  Figures are unnecessary.
Posted by Bob Lafond at 10:47 AM No comments: 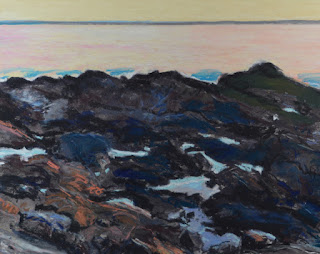 An 11x14 pastel of an early morning view from the Marginal Way in Ogunquit, Maine.

In my continuing pursuit of Isaac Levitan, I think I can appreciate his response to nature.  Levitan had a difficult life of only forty years.  His parents died while he was still a teenager.  He lived in severe poverty until he was in his late twenties.  He suffered from bad health in his adult years.  Twice he was expelled from Moscow, along with others, for being a Jew.  He was a melancholic, often depressed, even to the point of attempting suicide a couple times.  His view of nature was not unexpectedly full of emotion.  In nature he found some consolation because he could paint masterful landscapes to express his emotions.
Posted by Bob Lafond at 5:38 PM No comments: 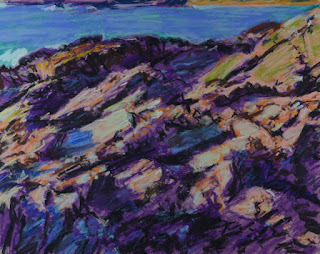 Another pastel: an 11x14 on uart paper of a view in Ogunquit from the Marginal Way.

My quick survey on the Internet finds many people writing that Levitan was some kind of Russian impressionist just because he used some bright oil paint and knew what was going on in Europe.  But even a cursory look at the images of his paintings reveals that he had a different outlook on nature than Monet or Sisley.  He spiritualizes nature.  Light and dark have deep emotional resonances.  Vistas reveal yearning. There's nothing shallow about him.  Just look at how he painted trees.  And yet he still was a great colorist and a great composer of images.  The Russian book on Isaac Levitan that I mentioned in my last posting contains a summary in English.  The author, Vladimir Aleksandrovich Petrov, quotes an unnamed critic who sums up succinctly Levitan's relationship to nature.  He wrote: "...in his late years [he] 'tried to monumentalize the earth's breathing.'"
Posted by Bob Lafond at 9:37 PM No comments: 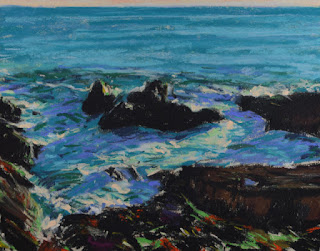 Another pastel.  This time it's an 8x10 of another view from the Marginal Way at Ogunquit.  I've been thinking of doing a study of Isaac Levitan, the late 19th century Russian landscapist.  I just borrowed a book from the library.  It has great pictures, but it's in Russian.  I've always felt that if he were better known, he would be recognized as one of the great painters of the 19th century.  He is that, but just not that well known, since I think, most, if not all his paintings are in Russia.  Let me see what I can discover.
Posted by Bob Lafond at 9:15 PM No comments: 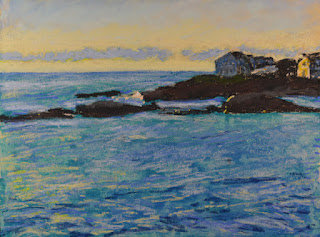 A pastel.  This is a 9x12 of the view of Oarweed Bay at Ogunquit early in the morning.
Posted by Bob Lafond at 9:01 AM No comments:

A 12x24 oil on canvas view of a building at the corner of Dartmouth and Montgomery Streets in Boston's South End, always known to me as 23 Dartmouth.  It's the site of Haley House, a soup kitchen,  and much more now, which will be celebrating its fiftieth anniversary in December.  The painting will be available in a silent auction to benefit Haley House.
Posted by Bob Lafond at 12:49 PM No comments: